My first attempt to a script for a storytelling competition 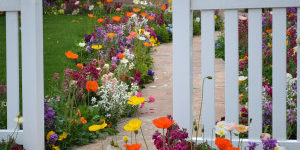 I did not know until now that I could write a story!

Earlier this day I was requested to give in some ideas for a storytelling competition for a 3rd grade student. I have not been with a seven year old and I have no clue what their level of expertise is. Thanks to Google, I came across some data and stared writing what I thought would be a good story. I am not sure if it will be used but am glad that I took a shot at it! I am going to use this one for my daughter Allie for sure!

Here is how the story goes:

What pent up anger can do?

In the magical kingdom called Andelasia there once lived a beautiful girl named Iris and her mother Azalea… Azalea was a gardener and she had a magical garden that produced flowers.

The secret about this garden was that every time Azalea was angry it produced thorns and every time she was kind, generous, honest the garden produced beautiful flowers. Flowers like roses, daffodils, lilies, Dahlia, Carnations, lavenders and more. Azalea’s garden was so beautiful that people from far and wide came to see it all the time. The travellers were mesmerized by the beauty of the garden and often remarked, “Azalea this garden seems to be so beautiful like you!” No one knew the secret of the garden, not even her daughter, Iris.

Iris on the other hand was a very arrogant and rude. Her beauty was overshadowed by her angry nature. She was nothing like her mother. She had only one friend, Lily. But she fought with her too.

One day Azalea fell ill and on her death bed told Iris “ My child, this garden is now yours and she said remember “Beauty lies on the inside”.

Iris did not understand these words. But she kept it in her heart. Days and weeks went by Iris began to feel sad, hurt, angry… there was no kindness in her. She was angry to have lost her mother, angry because she was alone, angry because she had no one else not even Lily. But she was sincere in taking care of the plants because she loved her mother. She watered it, pruned it took care of it but it was all rotting. The garden was now filled with thorns and thistles. She dint know what to do! Her mother’s words softly rang – Beauty lies on the inside! All of her insides yelled, What beauty?!

On hearing about Azalea’s death, Lily came to comfort Iris of her mother’s loss. Lily told her that she was there to help, seeing Lily’s kindness, besides her rude and selfish nature, Iris broke down and began to talk to Lily about what she felt. Why she was angry and as she poured out her heart, as the anger in Iris began to diminish and gratefulness and thankfulness filled her heart something strange happened… The thorns and thistles began to go away and new flowers started to bloom!

Lily called out “Look Iris! Your garden – It looks beautiful!” At once Iris understood what her mother said “Beauty lies on the inside”. Her garden was blooming because of her heart that was beautiful and the garden depicted her heart. Iris understood the secret about her magical garden. Every time she saw little thorns come up she would look inside her heart to see what was causing them. And as she sorted it out, the garden flourished and was beautiful as ever.

So friends let us learn to keep our own gardens beautiful by keeping our hearts beautiful. Let us remember what William Blake penned in his poem A Poison Tree:

And I watered it in fears,
Night and morning with my tears;
And I sunned it with smiles,
And with soft deceitful wiles.

And it grew both day and night,
Till it bore an apple bright.
And my foe beheld it shine.
And he knew that it was mine,

And into my garden stole
When the night had veiled the pole;
In the morning glad I see
My foe outstretched beneath the tree.