Keep watch on yourself, lest you too be tempted 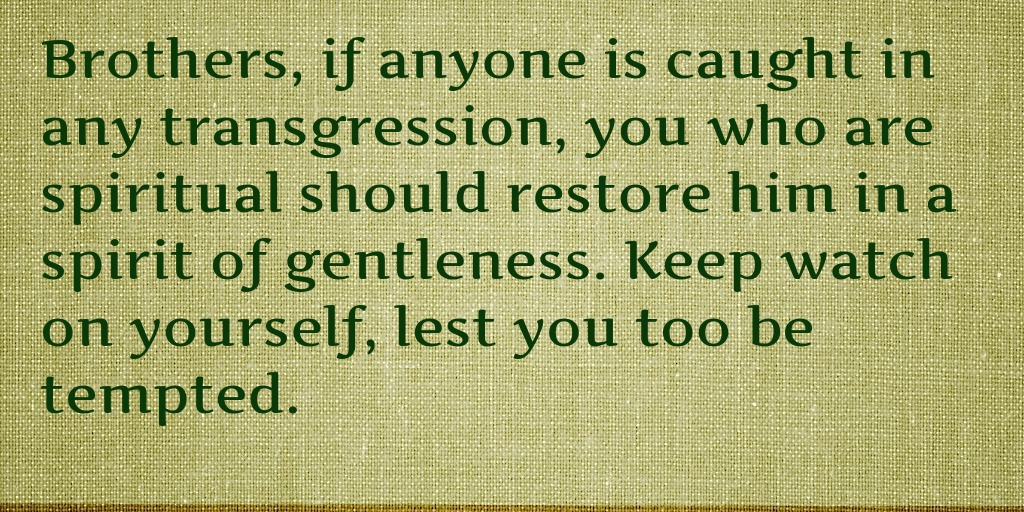 Galatians 6:1 has this very interesting warning:

“Brothers, if anyone is caught in any transgression, you who are spiritual should restore him in a spirit of gentleness. Keep watch on yourself, lest you too be tempted”

I have wondered why would Paul warn anyone who is seeking the good of another and help them out of a transgression need to be warned about watching themselves. Aren’t they better off? Have they not overcome to some degree? Do they not know the dangers of sin and it’s enticement.

I have only recently learned the importance of this verse. What a warning!

Two recent instances come to my mind when I think about this verse. In one instance I have fallen to temptation and now am myself a transgressor, in another instance I have been tempted.

When I became a transgressor

I had visited a family. In this family the father is a professed agnostic. The wife claims to be a Christian. They have a son who is the picture of disobedience. The son is rarely disciplined by his father in a manner that is winsome or profitable. His mother raises him as best as she can. But knowing to whatever extent he does that his father and mother have differing views on parenting he knows how to use it to his advantage very well. Don’t all kids know how to use this method. Therefore he can get away with anything when his father is around so long as he does not annoy his father.

But all hell breaks lose when his father is annoyed. His father yells like a roaring lion. And when you hear one of these the whole place gets silent. It take more than a few seconds for everyone to recover. The father makes sure the job is done.

But I was never guarding my own heart at that point. Why? I up until that point did not know it’s necessity. In a matter of time I started yelling at my little girl at the top of my voice. It would get the job done. I felt victorious. She was crushed. My wife probably confused. But soon this became a habit and I did not notice I was sinning. I just felt I have learned how to get things done.

Then one day my eyes were opened by God to see my sin. It was there in plain sight. I was sinning against my daughter by not shepherding her heart. I was getting her to do my will and not parenting her. I learned this technique from an unbeliever. I had not watched myself. I became the transgressor I did not want to be. I now have to deal with this sin like I have to with my other struggles. Yet another sin to overcome.

When I was tempted

As a pastor, I regularly counsel couples who struggle. Almost always it is a case of two selfish people being unloving to each other. After many counsels a pattern was emerging in my mind. These men got their wives to do as they pleased because of their selfish ways. They used anger, rage, yelling, and even violence at time as their weapon of choice. (I am ignoring the sin of the women simply because it has nothing to do with my struggle).

Initially I used to feel sad for these men and desire their repentance. But as time progressed a thought creeped into my head “How easy it would be for me if I were a selfish man?” I would not have to chose the middle path. I would not have to have it any other way but my way.

Though I had not committed any sin, I was tempted to become a selfish spouse. I would have been immensely happy. But I would have sinned against my wife.

I’m glad God opened my eyes to see what I would become had I continued to brood these thoughts.

I’m glad there is a warning in the Bible. Now, I understand Galatians 6:1!

Have you ever let yourself sin because of not keeping watch over yourself?